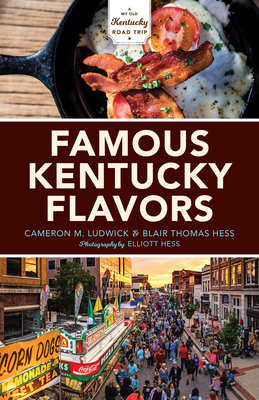 Kentucky has a rich tradition of good eatin', with famous classics like fried chicken and bourbon balls along with less-well-known Bluegrass mainstays like spoonbread, burgoo, and Derby pie.

There's nothing worse than pulling off the road for a tasty bite and being confronted with an unappetizing meal instead. Veteran road trippers and Kentucky natives Cameron Ludwick and Blair Thomas Hess are on a mission to help you ditch the dives. They have traveled the state and mapped out the best local foods, festivals, and flavors. From their trek to the Beer Cheese Festival in Winchester to the Hot Brown Hop in Louisville, these gals know the best places to eat and want to take you along for the ride in Famous Kentucky Flavors. Along the way, you'll visit all the classics and will also be introduced to some more unusual fare, including lamb fries, Benedictine spread, and barbecued mutton.

Plan your own lip-smacking road trip from bourbon balls to burgoo with Famous Kentucky Flavors.

Cameron M. Ludwick is a bookworm, trivia nerd, and former band geek who still relies on the survival skills she learned at Girl Scout camp to cope with nature. A Kentucky native, she now has bigger hair and lives in Austin, Texas. Blair Thomas Hess is a born-and-bred Kentuckian who once won a sack-the-pig contest at the Trigg County Country Ham Festival. She resides in Frankfort, Kentucky, with her daughter and her picture-taking, bourbon-collecting husband. Together, these long-time friends travel across the Commonwealth of Kentucky, exploring its various wonders and uncovering its best-kept secrets. They share these secrets in the My Old Kentucky Road Trip books, which include The State of Bourbon and Presidents, Battles, and Must-See Civil War Destinations. Follow the adventure at myoldkentuckyroadtrip.com and on Twitter (@MyOldKYRoadTrip) and Instagram (@myoldkentuckyroadtrip).
Loading...
or support indie stores by buying on