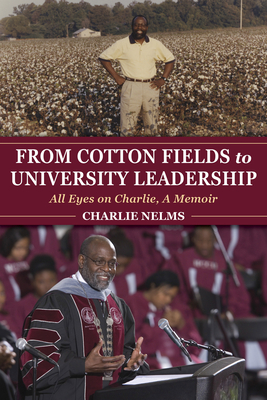 All Eyes on Charlie, a Memoir (Well House Books)

Charlie Nelms had audaciously big dreams. Growing up black in the Deep South in the 1950s and 1960s, working in cotton fields, and living in poverty, Nelms dared to dream that he could do more with his life than work for white plantation owners sun-up to sun-down. Inspired by his parents, who first dared to dream that they could own their own land and have the right to vote, Nelms chose education as his weapon of choice for fighting racism and inequality.

With hard work, determination, and the critical assistance of mentors who counseled him along the way, he found his way from the cotton fields of Arkansas to university leadership roles. Becoming the youngest and the first African American chancellor of a predominately white institution in Indiana, he faced tectonic changes in higher education during those ensuing decades of globalization, growing economic disparity, and political divisiveness. From Cotton Fields to University Leadership is an uplifting story about the power of education, the impact of community and mentorship, and the importance of dreaming big.

Charlie Nelms, a native of the Arkansas Delta, has devoted his life to equalizing opportunities for disenfranchised peoples. He is currently a senior scholar at the American Association of State Colleges and Universities and a Center Scholar at the Center for Postsecondary Research, Indiana University School of Education, as well as retired Chancellor, North Carolina Central University, and IU Vice President for Institutional Development and Student Affairs Emeritus. In retirement, he works with historically Black colleges and universities to strengthen leadership and governance. Dr. Walter M. Kimbrough is president of Dillard University in New Orleans, Louisiana. Dr. Kimbrough holds degrees from the University of Georgia, Miami University of Ohio, and Georgia State University. He has been recognized for his research on historically black colleges and universities, African American men in college, and fraternaties and sororities. In 2010 he was named as part of the Ebony Magazine Power 100 list and in 2013 he became one of NBC News/The Griot.com's 100 African Americans making history today.
or
Buy Here
Copyright © 2020 American Booksellers Association