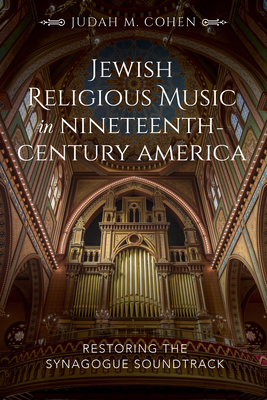 In Jewish Religious Music in Nineteenth-Century America: Restoring the Synagogue Soundtrack, Judah M. Cohen demonstrates that Jews constructed a robust religious musical conversation in the United States during the mid- to late-19th century. While previous studies of American Jewish music history have looked to Europe as a source of innovation during this time, Cohen's careful analysis of primary archival sources tells a different story. Far from seeing a fallow musical landscape, Cohen finds that Central European Jews in the United States spearheaded a major revision of the sounds and traditions of synagogue music during this period of rapid liturgical change.

Focusing on the influences of both individuals and texts, Cohen demonstrates how American Jewish musicians sought to balance artistry and group singing, rather than "progressing" from solo chant to choir and organ. Congregations shifted between musical genres and practices during this period in response to such factors as finances, personnel, and communal cohesiveness. Cohen concludes that the "soundtrack" of 19th-century Jewish American music heavily shapes how we look at Jewish American music and life in the first part of the 21st-century, arguing that how we see, and especially hear, history plays a key role in our understanding of the contemporary world around us. Supplemented with an interactive website that includes the primary source materials, recordings of the music discussed, and a map that highlights the movement of key individuals, Cohen's research defines more clearly the sound of 19th-century American Jewry.

Judah M. Cohen is the Lou and Sybil Mervis Professor of Jewish Culture and Associate Professor of Musicology at Indiana University Bloomington. He is author of The Making of a Reform Jewish Cantor: Musical Authority, Cultural Investment and Through the Sands of Time: A History of the Jewish Community of St. Thomas, US Virgin Islands.
or support indie stores by buying on
Copyright © 2020 American Booksellers Association