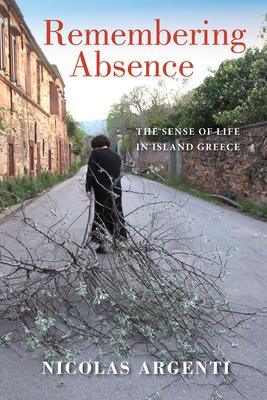 The Sense of Life in Island Greece (New Anthropologies of Europe)

Drawing on research conducted on Chios during the sovereign debt crisis that struck Greece in 2010, Nicolas Argenti follows the lives of individuals who symbolize the transformations affecting this Aegean island. As witnesses to the crisis speak of their lives, however, their current anxieties and frustrations are expressed in terms of past crises that have shaped the dramatic history of Chios, including the German occupation in World War II and the ensuing famine, the exchange of populations between Greece and Turkey of 1922-23, and the Massacres of 1822 that decimated the island at the outset of the Greek War of Independence. The complex temporality that emerges in these accounts is ensconced in a cultural context of commemorative ritual, ecstatic visions, an annual rocket war, and other embodied practices that contribute to forms of memory production that question the assumptions of the trauma discourse, revealing the islanders of Chios to be active in forging their place in time in a manner that blurs the boundaries between historiography, memory, religion, and myth.

A member of the Chiot diaspora, Argenti makes use of unpublished correspondence from survivors of the Massacres of 1822 and their descendants and reflects on oral family histories and silences in which the island represents an enigmatic but palpable absence. As he explores the ways in which a body of memory and a cultural experience of temporality came to be dislocated and shared between two populations, his return to Chios marks an encounter in which the traditional roles of ethnographer and participant come to be dispersed and intertwined.

Nicolas Argenti is Senior Lecturer in Anthropology at Brunel University. He is author of The Intestines of the State: Youth, Violence and Belated Histories in the Cameroon Grassfields, and editor (with Katharina Schramm) of Remembering Violence: Anthropological Perspectives on Intergenerational Transmission.
or support indie stores by buying on
Copyright © 2020 American Booksellers Association