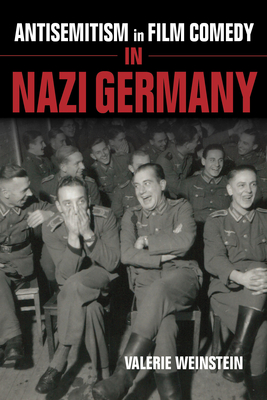 Today many Germans remain nostalgic about "classic" film comedies created during the 1930s, viewing them as a part of the Nazi era that was not tainted with antisemitism. In Antisemitism in Film Comedy in Nazi Germany, Valerie Weinstein scrutinizes these comic productions and demonstrates that film comedy, despite its innocent appearance, was a critical component in the effort to separate "Jews" from "Germans" physically, economically, and artistically. Weinstein highlights how the German propaganda ministry used directives, pre- and post-production censorship, financial incentives, and influence over film critics and their judgments to replace Jewish "wit" with a slower, simpler, and more direct German "humor" that affirmed values that the Nazis associated with the Aryan race. Through contextualized analyses of historical documents and individual films, Weinstein reveals how humor, coded hints and traces, absences, and substitutes in Third Reich film comedy helped spectators imagine an abstract "Jewishness" and a "German" identity and community free from the former. As resurgent populist nationalism and overt racism continue to grow around the world today, Weinstein's study helps us rethink racism and prejudice in popular culture and reconceptualize the relationships between film humor, national identity, and race.

Valerie Weinstein is Associate Professor in the Department of Women's, Gender, and Sexuality Studies and affiliate faculty in German Studies, Judaic Studies, and Film and Media Studies at the University of Cincinnati. She is editor (with Barbara Hales and Mihaela Petrescu) of Continuity and Crisis in German Cinema, 1928-1936.
or
Buy Here
Copyright © 2020 American Booksellers Association