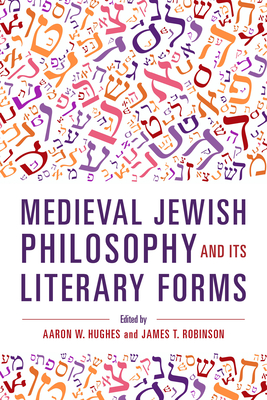 Too often the study of philosophical texts is carried out in ways that do not pay significant attention to how the ideas contained within them are presented, articulated, and developed. This was not always the case. The contributors to this collected work consider Jewish philosophy in the medieval period, when new genres and forms of written expression were flourishing in the wake of renewed interest in ancient philosophy. Many medieval Jewish philosophers were highly accomplished poets, for example, and made conscious efforts to write in a poetic style. This volume turns attention to the connections that medieval Jewish thinkers made between the literary, the exegetical, the philosophical, and the mystical to shed light on the creativity and diversity of medieval thought. As they broaden the scope of what counts as medieval Jewish philosophy, the essays collected here consider questions about how an argument is formed, how text is put into the service of philosophy, and the social and intellectual environment in which philosophical texts were produced.

Kalman P. Bland (1942-2017) was Professor Emeritus in the Department of Religious Studies at Duke University. His publications include The Epistle on the Possibility of Conjunction with the Active Intellect by Ibn Rushd with the Commentary by Moses Narboni and The Artless Jew: Medieval and Modern Affirmations and Denials of the Visual. Raphael Dascalu is an Adjunct Research Associate at Monash University, Melbourne, Australia. Igor H. de Souza is Lecturer in Humanities, Women's, Gender, and Sexuality Studies, and Associate Research Scholar in Judaic Studies, Yale University. He is author of Rewriting Maimonides: Early Commentaries on the Guide of the Perplexed. Yehuda Halper is Senior Lecturer in the Department of Jewish Philosophy at Bar Ilan University. He is the recipient of the Yigal Alon Fellowship and editor of Philosophy and the Jewish Tradition: Lectures and Essays by Aryeh Leo Motzkin. Steven Harvey is Professor Emeritus of Medieval Jewish and Islamic Philosophy at Bar-Ilan University. He is author of Falaquera's Epistle of the Debate: An Introduction to Jewish Philosophy. Gyongyi (Ginger) Hegedus is Associate Professor at the Department of Philosophy and Religious Studies at Western University (London, Ontario). She is author of Saadya Gaon: The Double Path of the Mystic and the Rationalist. Aaron W. Hughes is the Philip S. Bernstein Professor of Jewish Studies at the University of Rochester. He is the author of many books, including Rethinking Jewish Philosophy: Beyond Particularism and Universalism. Maud Kozodoy currently works for the Posen Foundation on the editorial staff of the Posen Library of Jewish Culture and Civilization. She is author of The Secret Faith of Maestre Honoratus: Profayt Duran and Jewish Identity in Late Medieval Iberia. Charles H. Manekin is professor of Philosophy at the University of Maryland. He is editor (with Daniel Davies) of Interpreting Maimonides. Chaim Meir Neria is a lecturer at Oranim College of Education, Israel. James Theodore Robinson is the Caroline E. Haskell Professor of the History of Judaism, Islamic Studies, and the History of Religions at the University of Chicago Divinity School. He is the author of several books and articles on medieval Jewish philosophy, literature, and biblical exegesis. Shira Weiss is a postdoctoral fellow in the department of Jewish Thought at Ben Gurion University. She is author of Joseph Albo on Free Choice: Exegetical Innovation in Medieval Jewish Philosophy, as well as articles in Jewish Quarterly Review, Journal of Religious Ethics and Journal of Jewish Ethics.
or support indie stores by buying on
Copyright © 2020 American Booksellers Association