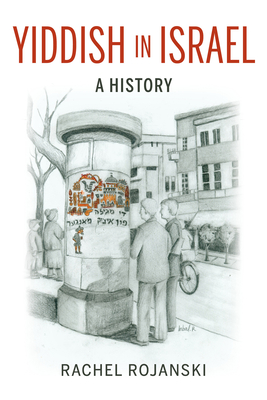 A History (Perspectives on Israel Studies)

Yiddish in Israel: A History challenges the commonly held view that Yiddish was suppressed or even banned by Israeli authorities for ideological reasons, offering instead a radical new interpretation of the interaction between Yiddish and Israeli Hebrew cultures. Author Rachel Rojanski tells the compelling and yet unknown story of how Yiddish, the most widely used Jewish language in the pre-Holocaust world, fared in Zionist Israel, the land of Hebrew.

Following Yiddish in Israel from the proclamation of the State until today, Rojanski reveals that although Israeli leadership made promoting Hebrew a high priority, it did not have a definite policy on Yiddish. The language's varying fortune through the years was shaped by social and political developments, and the cultural atmosphere in Israel. Public perception of the language and its culture, the rise of identity politics, and political and financial interests all played a part. Using a wide range of archival sources, newspapers, and Yiddish literature, Rojanski follows the Israeli Yiddish scene through the history of the Yiddish press, Yiddish theater, early Israeli Yiddish literature, and high Yiddish culture. With compassion, she explores the tensions during Israel's early years between Yiddish writers and activists and Israel's leaders, most of whom were themselves Eastern European Jews balancing their love of Yiddish with their desire to promote Hebrew. Finally Rojanski follows Yiddish into the 21st century, telling the story of the revived interest in Yiddish among Israeli-born children of Holocaust survivors as they return to the language of their parents.

Rachel Rojanski is Associate Professor of Judaic Studies at Brown University. She is author of Conflicting Identities: Labor Zionism in North America 1905-1931 (in Hebrew) as well as many articles on political and cultural history of East European Jewish immigrants in the U.S. and Israel.
or
Buy Here
Copyright © 2020 American Booksellers Association