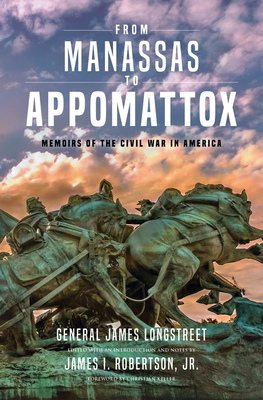 From Manassas to Appomattox (Paperback)

Memoirs of the Civil War in America

Peer through history at Confederate Lieutenant General James Longstreet, whose steady nature and dominating figure earned him the nicknames "War Horse," "Bulldog," and "Bull of the Woods." Years after the war, Longstreet's reputation swung between Confederate hero and brutish scoundrel. A dutiful soldier with a penchant for drink and gambling, Longstreet spoke little but inspired many, and he continues to fascinate Civil war historians.

In his memoir From Manassas to Appomattox, Longstreet reveals his inner musings and insights regarding the War between the States. Ever the soldier, he skims over his personal life to focus on battle strategies, war accounts, and opinions regarding other officers who were as misunderstood as him. The principle subordinate under General Robert E. Lee, Longstreet provides several accounts of Lee's leadership and their strong partnership.

An invaluable firsthand account of life during the Civil War, From Manassas to Appomattox not only illuminates the life and ambitions of Lieutenant General James Longstreet, but it also offers an in-depth view of army operations within the Confederacy. An introduction and notes by prominent historian James I. Robertson Jr. and a new foreword by Christian Keller offer insight into the impact of Longstreet's career on American history.

James Longstreet was a Confederate general under Robert E. Lee. James I. Robertson Jr. was Alumni Distinguished Professor Emeritus at Virginia Tech and the author of numerous titles. He died in November 2019. Christian Keller is Professor of History in the Department of National Security and Strategy at War College and is the author of Pennsylvania: A Military History.
or
Buy Here
Copyright © 2020 American Booksellers Association