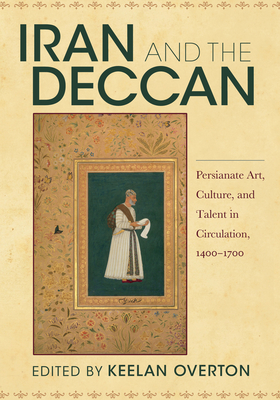 Iran and the Deccan

In the early 1400s, Iranian elites began migrating to the Deccan plateau of southern India. Lured to the region for many reasons, these poets, traders, statesmen, and artists of all kinds left an indelible mark on the Islamic sultanates that ruled the Deccan until the late seventeenth century. The result was the creation of a robust transregional Persianate network linking such distant cities as Bidar and Shiraz, Bijapur and Isfahan, and Golconda and Mashhad.

Iran and the Deccan explores the circulation of art, culture, and talent between Iran and the Deccan over a three-hundred-year period. Its interdisciplinary contributions consider the factors that prompted migration, the physical and intellectual poles of connectivity between the two regions, and processes of adaptation and response. Placing the Deccan at the center of Indo-Persian and early modern global history, Iran and the Deccan reveals how mobility, liminality, and cultural translation nuance the traditional methods and boundaries of the humanities.

Keelan Overton is an independent scholar and historian of Islamic art and architecture specializing in the eastern Islamic world from Iran to South Asia. She is author of Book Culture, Royal Libraries, and Persianate Painting in Bijapur, circa 1580-1630 (Muqarnas, 2016) and Filming, Photographing and Purveying in 'the New Iran: ' The Legacy of Stephen H. Nyman, ca. 1937-42 (in Arthur Upham Pope and A New Survey of Persian Art, 2016).
Loading...
or support indie stores by buying on