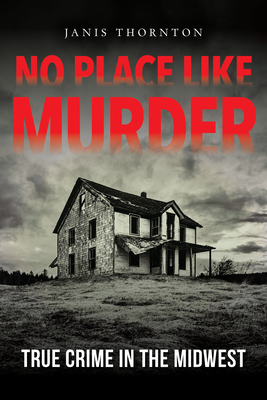 True Crime in the Midwest

A modern retelling of 20 sensational true crimes, No Place Like Murder reveals the inside details behind nefarious acts that shocked the Midwest between 1869 and 1950. The stories chronicle the misdeeds, examining the perpetrators' mindsets, motives, lives, apprehensions, and trials, as well as what became of them long after.
True crime author Janis Thornton profiles notorious murderers such as Frankie Miller, who was fed up when her fianc stood her up for another woman. As fans of the song Frankie and Johnny already know, Frankie met her former lover at the door with a shotgun.
Thornton's tales reveal the darker side of life in the Midwest, including the account of Isabelle Messmer, a plucky young woman who dreamed of escaping her quiet farm-town life. After she nearly took down two tough Pittsburgh policemen in 1933, she was dubbed Gun Girl and went on to make headlines from coast to coast. In 1942, however, after a murder conviction in Texas, she vowed to do her time and go straight. Full of intrigue and revelations, No Place Like Murder also features such folks as Chirka and Rasico, the first two Hoosier men to die in the electric chair after they brutally murdered their wives in 1913. The two didn't meet until their fateful last night.
An enthralling and chilling collection, No Place Like Murder is sure to thrill true crime lovers.

Janis Thornton is the author of the true crime story Too Good a Girl; two cozy mysteries, Dust Bunnies & Dead Bodies and Dead Air & Double Dare; and a stand-alone mystery, Love, Lies, and Azure Eyes. In addition, she has produced three pictorial-history books in the Images of America series, highlighting Indiana's Tipton County and the cities of Elwood and Frankfort. She is a member of the national Sisters in Crime organization and its Indianapolis chapter, the Authors Guild, the Indianapolis Writers Center, and the Tipton County Historical Society. She is based in Tipton, Indiana. To see more of her work, visit www.janis-thornton.com, Twitter (@JanisThornton), and Facebook (facebook.com/janisthorntonauthor).
Loading...
or support indie stores by buying on