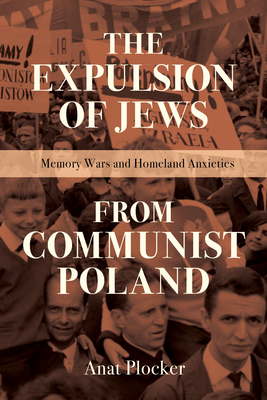 The Expulsion of Jews from Communist Poland

In March 1968, against the background of the Six-Day War, a campaign of antisemitism and anti-Zionism swept through Poland. The Expulsion of Jews from Communist Poland is the first full-length study of the events, their precursors, and the aftermath of this turbulent period.

Plocker offers a new framework for understanding how this antisemitic campaign was motivated by a genuine fear of Jewish influence and international power. She sheds new light on the internal dynamics of the communist regime in Poland, stressing the importance of middle-level functionaries, whose dislike and fear of Jews had an unmistakable impact on the evolution of party policy.

The Expulsion of Jews from Communist Poland examines how Communist Party leader Wladyslaw Gomulka's anti-Zionist rhetoric spiraled out of hand and opened up a fraught Pandora's box of old assertions that Jews controlled the Communist Party, the revival of nationalist chauvinism, and a witch hunt in universities and workplaces that conjured up ugly memories of Nazi Germany.

Anat Plocker teaches at the School of General Studies at Stockton University, specializing in Modern European History. Her work on communist Poland has appeared in English, Polish and Hebrew.
Loading...
or support indie stores by buying on