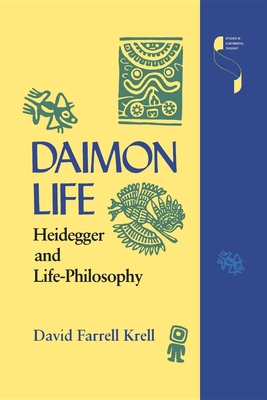 Daimon Life is life-enchancing. To read it is to become richer in wor(l)d. -John Llewelyn

Disclosure of Martin Heidegger's complicity with the National Socialist regime in 1933-34 has provoked virulent debate about the relationship between his politics and his philosophy. Did Heidegger's philosophy exhibit a kind of organicism readily transformed into ideological blood and soil? Or, rather, did his support of the Nazis betray a fundamental lack of loyalty to living things? David Farrell Krell traces Heidegger's political authoritarianism to his failure to develop a constructive life-philosophy--his phobic reactions to other forms of being. Krell details Heidegger's opposition to Lebensphilosophie as expressed in Being and Time, in an important but little-known lecture course on theoretical biology given in 1929-30 called The Basic Concepts of Metaphysics, and in a recently published key text, Contributions to Philosophy, written in 1936-38. Although Heidegger's attempt to think through the problems of life, sexual reproduction, behavior, environment, and the ecosystem ultimately failed, Krell contends that his methods of thinking nonetheless pose important tasks for our own thought. Drawing on and away from Heidegger, Krell expands on the topics of life, death, sexuality, and spirit as these are treated by Freud, Nietzsche, Derrida, and Irigaray. Daimon Life addresses issues central to contemporary philosophies of politics, gender, ecology, and theoretical biology.

DAVID FARRELL KRELL is Professor of Philosophy at DePaul University. He is author of Of Memory, Reminiscence, and Writing: On the Verge and Postponements: Woman, Sensuality, and Death in Nietzsche and translator of Nietzsche; Early Greek Thinking; and Basic Writings by Martin Heidegger.
Loading...
or support indie stores by buying on