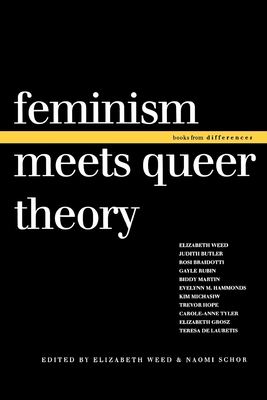 "... innovative and important thinking about the various relations between feminist theory, queer theory, and lesbian theory, as well as the possibility that liberation can be mutual rather than mutually exclusive." --Lambda Book Report

When feminism meets queer theory, no introductions seem necessary. The two share common political interests--a concern for women's and gay and lesbian rights--and many of the same academic and intellectual roots. And yet, they can also seem like strangers, needing mediation, translation, clarification. This volume focuses on the encounters of feminist and queer theories, on the ways in which basic terms such as "male" and "female," "man" and "woman," "black," "white," "sex," "gender," and "sexuality" change meaning as they move from one body of theory to another. Along with essays by Judith Butler, Evelynn Hammonds, Biddy Martin, Kim Michasiw, Carole-Anne Tyler, and Elizabeth Weed, there are interviews: Judith Butler engages Rosi Braidotti and Gayle Rubin in separate revealing discussions. And there are critical exchanges: Rosi Braidotti and Trevor Hope exchange comments on his reading of her work; and Teresa de Lauretis responds to Elizabeth Grosz's review of her recent book.

Naomi Schor, Professor of Romance Languages and Literatures at Harvard University, is the author of Bad Objects: Essays Popular and Unpopular and Breaking the Chain: Women, Theory, and French Realist Fiction.Elizabeth Weed, Associate Director of the Pembroke Center for Teaching and Research on Women at Brown University, is editor of Coming to Terms: Feminism--Theory--Politics.
or
Buy Here
Copyright © 2020 American Booksellers Association