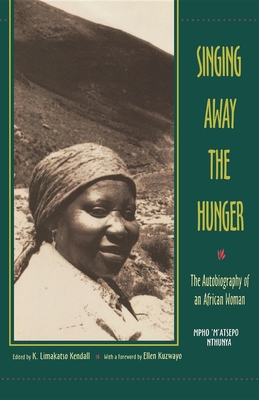 Singing Away the Hunger (Paperback)

The Autobiography of an African Woman

"... this gem of a book deserves a wide audience. Appropriate for African and women's studies courses and a must for college and university libraries." --Choice

"... Mpho relates the story of her life with an integrity that makes for utterly compelling reading.... The fortitude of this woman, now in her late 60s, is a lesson to us all." --The Bookseller, United Kingdom

"This is a fascinating autobiography..." --KLIATT

"... a powerful autobiography of a Lesotho elder who tells her life as an African woman in South Africa. The focus on black culture and concerns as much as racism allows for an unusual depth of understanding of black concerns and lifestyles in Africa." --Reviewer's Bookwatch

"An African woman's poignant and beautifully crafted memoir lyrically portrays the brutal poverty and reliance on ritual that shape the lives of her people, the Basotho.... A commanding and important work that will captivate readers with its unique voice, narrative power, and unforgettable scenes of life in Southern Africa." --Kirkus Reviews

"... a stunning autobiography of a remarkable woman... Nthunya's telling is eloquent. Although her voice is generally one of dignified emotional distance, it is punctuated by her very human humor and pain." --Publishers Weekly

"I am telling my stories in English for many months now, and it is a time for me to see my whole life. I see that things are always changing. I was born in 1930, so I remember many things which were happening in the old days in Lesotho and which happen no more. I lived in Benoni Location for more than ten years, and I saw the Boer policemen taking black people and beating them like dogs. They even took me once, and kept me in one of their jails for a while." --Mpho 'M'atsepo Nthunya

A compelling and unique autobiography by an African woman with little formal education, less privilege, and almost no experience of books or writing. Mpho's is a voice almost never heard in literature or history, a voice from within the struggle of "ordinary" African women to negotiate a world which incorporates ancient pastoral ways and the congestion, brutality, and racist violence of city life. It is also the voice of a born storyteller who has a subject worthy of her gifts--a story for all the world to hear.

Mpho 'M'atsepo Nthunya was born in Lesotho in 1930 and educated in South Africa. Having returned to Lesotho in 1949 to escape apartheid, she supported her family as a domestic worker for thirty years. K. Limakatso Kendall is an American actor, writer, and academic who emigrated to South Africa in 1995. She is now Professor of Drama Studies at the University of Natal, Pietermaritzburg.
or
Buy Here
Copyright © 2020 American Booksellers Association