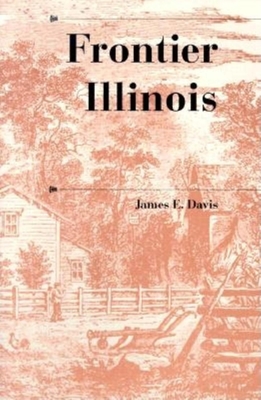 "A comprehensive, readable history of this distinctive prairie state before the Civil War. . . . This deft synthesis of existing knowledge is likely to become the standard modern history of Illinois." --Kirkus Reviews

"O, this is a delightful country " one newly arrived settler wrote to a friend back East. Indeed, as James E. Davis shows, many newcomers found Illinois a hospitable and relatively peaceful place in which to start a new life. In this sweeping history of the making of the state, Davis tells the story of Illinois from the Ice Age to the eve of the Civil War. He describes the earliest Indian
civilizations, the coming of LaSalle and Joliet and the founding of the French colony, the brief history of British Illinois, and the complex history of subsequent settlement that brought distinct cultural traditions to Illinois.

A major theme of this book is the relative absence of violence, at least after the Blackhawk War of 1832, even over explosive issues such as slavery. Davis treats these developments in careful detail, while keeping the reader mindful of the experiences of Illinois' ordinary people.

James E. Davis is William and Charlotte Gardner Professor of History and Professor of Geography at Illinois College. He is author of Frontier America, 1800-1840: A Comparative
Demographic Analysis of the Settlement Process and Dreams to Dust.

A History of the Trans-Appalachian Frontier series--Walter Nugent and Malcolm Rohrbough, general editors

James E. Davis is William and Charlotte Gardner Professor of History and Professor of Geography at Illinois College. He is the author of FRONTIER AMERICA, 1800-1840: A COMPARATIVE DEMOGRAPHIC ANALYSIS OF THE SETTLEMENT PROCESS (1977), DREAMS TO DUST (1989), and a number of articles, monographs, edited works, and reviews. Professor Davis is recipient of the Harry J. Dunbaugh Distinguished Professor Award for outstanding teaching (1981 and 1993) and was an NEH Fellow in St. Petersburg and Moscow, where he studied Russian architecture and art. He currently serves as a member of the Board of Directors of the Illinois State Historical Society and as a member of the Editorial Advisory Board of the JOURNAL OF ILLINOIS HISTORY.
or support indie stores by buying on
Copyright © 2020 American Booksellers Association