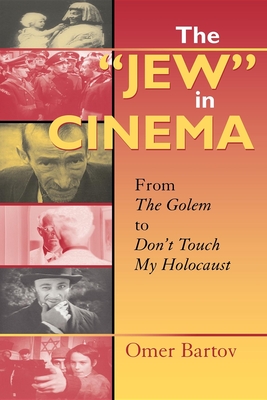 The "Jew" in Cinema (Paperback)

From cinema's beginnings, the film image of the "Jew" has closely followed the fortunes and misfortunes of Jews. Analyzing more than 70 films made in the Soviet Union, Poland, Hungary, Czechoslovakia and the Czech Republic, East and West Germany, France, Italy, the United States, and Israel from 1920 to the 1990s, noted historian Omer Bartov argues that depictions of the "Jew" in film have been fed by, or have reacted to, certain stereotypical depictions of Jews arising from age-old prejudices. These images, in turn, both reflected public attitudes and helped to shape them. He points to Mel Gibson's film The Passion of the Christ as one of the most recent examples of the phenomenon. In trenchant discussions of individual films, Bartov develops four basic cinematic representations of the "Jew": as perpetrator (especially in antisemitic films), as victim (especially in films about the Holocaust), as hero (especially in films about the state of Israel), and as anti-hero (especially in films about the Arab-Israeli conflict).

This absorbing book reveals the ways in which powerful images remained deeply embedded in the creative imagination, even as the circumstances that originally engendered them underwent profound changes. Bartov concludes that some of the fundamental prejudices about Jews, which predate cinema, persisted in cinematic depictions throughout the 20th century, although they have been reinterpreted according to changing political regimes, ideologies, and tastes. Covering a range of traditions and periods, The "Jew" in Cinema provides original and provocative interpretations that often contradict conventional views. Placing cinematic representations of the "Jew" within their historical context, Bartov demonstrates the powerful political, social, and cultural impact of these images on popular attitudes.

The Helen and Martin Schwartz Lectures in Jewish Studies

Omer Bartov is the John P. Birkelund Distinguished Professor of European History at Brown University. His many books include Hitler's Army, Mirrors of Destruction, and Germany's War and the Holocaust. He lives in Cambridge, Massachusetts.
or support indie stores by buying on
Copyright © 2020 American Booksellers Association