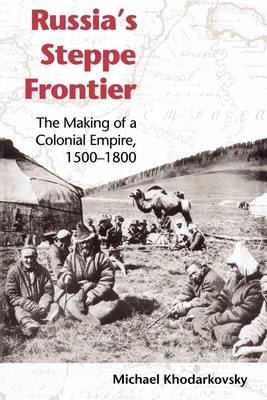 "Khodarkovsky provides a detailed chronological narrative of Russia's steppe relations, which conveys brilliantly the depth of Moscow's engagement in the world of steppe politics.... This is counterbalanced by insightful thematic discussion of the perennial issues involved.... Altogether, an excellent study of a vital dimension of Russia's historical evolution." --Slavonic and East European Review

"... the first connected account of Moscow's assertion of military and political control over its steppe frontier. The book's scope is impressive, as it traces the transformation of a turbulent steppe frontier into an imperial borderland.... a signal contribution to our understanding of European history." --American Historical Review

Drawing on sources and archival materials in Russian and Turkic languages, Russia's Steppe Frontier presents a complex picture of the encounter between indigenous peoples and the Russians. An original and invaluable resource for understanding Russia's imperial experience.

Michael Khodarkovsky is Associate Professor of History at Loyola University of Chicago. He is author of Where Two Worlds Met: The Russian State and the Kalmyk Nomads, 1600-1771 and co-editor (with Robert Geraci) of Of Religion and Empire: Missions, Conversion, and Tolerance in the Russian Empire.
or
Buy Here
Copyright © 2020 American Booksellers Association