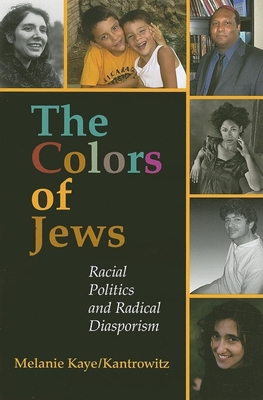 The Colors of Jews

Melanie Kaye/Kantrowitz exposes and challenges the common assumptions about whom and what Jews are, by presenting in their own voices, Jews of color from the Iberian Peninsula, Asia, Africa, and India. Drawing from her earlier work on Jews and whiteness, Kaye/Kantrowitz delves into the largely uncharted territory of Jews of color and argues that Jews are an increasingly multiracial people--a fact that, if acknowledged and embraced, could foster cross-race solidarity to help combat racism. This engaging and eye-opening book examines the historical and contemporary views on Jews and whiteness as well as the complexities of African/Jewish relations, the racial mix and disparate voices of the Jewish community, contemporary Jewish anti-racist and multicultural models, and the diasporic state of Jewish life in the United States.

Melanie Kaye/Kantrowitz is Adjunct Professor in Comparative Literature and Women's Studies at Queens College of CUNY and has taught in the Bard Women's Prison Initiative. She is a feminist scholar and poet whose many books include The Issue Is Power: Essays on Women, Jews, Violence and Resistance; My Jewish Face & Other Stories; and The Tribe of Dina: A Jewish Women's Anthology (with Irena Klepfisz). She lives in Elmhurst, New York.
Loading...
or support indie stores by buying on