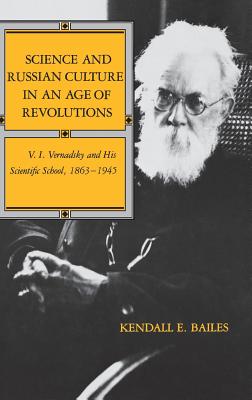 Science and Russian Culture in an Age of Revolutions (Hardcover)

" . . . scholarship of the highest order. . . . Kendall Bailes's book is destined to become a most valuable contribution to our knowledge of Russian and Soviet culture. It is insightful and eloquent." --Douglas R. Weiner

"This biography . . . not only tells a story full of human drama but also one rich with insights into Russia's higher-education and scientific-research establishments." --Washington Post Book World

" This] concise book, with references that stop short of the Gorbachev era, will be the foundation for all future scholarship in English on Vernadsky." --Nature

"In this insightful exploration of Vernadsky's legacy, Kendall Bailes unveils a creative scholar-activist whose life and work speak more clearly about his time than our own." --Science

"Kendall Bailes has left us with a vivid portrayal of the life and times of Vladimir Vernadsky." --The Russian Review

This first full-length English-language biography of Vladimir Vernadsky (1863-1945), one of the leading Russian intellectual figures of the twentieth century, focuses on the interaction between science and politics during Russia's revolutionary age.