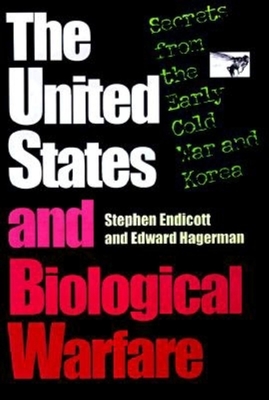 Secrets from the Early Cold War and Korea

The United States and Biological Warfare] is a major contribution to our understanding of the past involvement by the US and Japanese governments with BW, with important, crucial implications for the future. . . . Pieces of this story, including the Korean War allegations, have been told before, but never so authoritatively, and with such a convincing foundation in historical research. . . . This is a brave and significant scholarly contribution on a matter of great importance to the future of humanity.
--Richard Falk, Albert G. Milbank Professor of International Law and Practice, Princeton University

The United States and Biological Warfare argues persuasively that the United States experimented with and deployed biological weapons during the Korean War. Endicott and Hagerman explore the political and moral dimensions of this issue, asking what restraints were applied or forgotten in those years of ideological and political passion and military crisis.

For the first time, there is hard evidence that the United States lied both to Congress and the American public in saying that the American biological warfare program was purely defensive and for retaliation only. The truth is that a large and sophisticated biological weapons system was developed as an offensive weapon of opportunity in the post-World War II years. From newly declassified American, Canadian, and British documents, and with the cooperation of the Chinese Central Archives in giving the authors the first access by foreigners to relevant classified documents, Endicott and Hagerman have been able to tell the previously hidden story of the extension of the limits of modern war to include the use of medical science, the most morally laden of sciences with respect to the sanctity of human life. They show how the germ warfare program developed collaboratively by Great Britain, Canada, and the United States during the Second World War, together with information gathered from the Japanese at the end of World War II about their biological warfare technology, was incorporated into an ongoing development program in the United States. Startling evidence from both Chinese and American sources is presented to make the case.

An important book for anyone interested in the history and morality of modern warfare.

Stephen Endicott was born in Shanghai of missionary parents and grew up in China before the Communist revolution. His family lived in Sichuan province for three generations where he returned to teach in the 1980s. Dr. Endicott, who is a graduate of the University of Toronto, has received the Killam Senior Fellowship and other academic awards while teaching East Asian history at York University. His books include Diplomacy and Enterprise: British China Policy 1933-1937, James G. Endicott: Rebel Out of China, and Red Earth: Revolution in a Sichuan Village.Edward Hagerman is a member of the history faculty of York University in Toronto. He has published many articles on the origins of modern war and modern total war, and has contributed to textbooks for the U.S. Military Academy at West Point, the U.S. Army Command and General Staff college, the U.S. Air Force Academy, and the Air War College of the U.S. Air Force. He has authored The American Civil War and the Origins of Modern Warfare.
or support indie stores by buying on
Copyright © 2020 American Booksellers Association