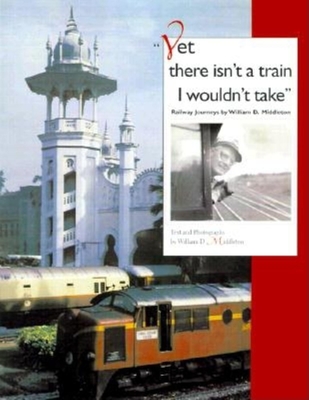 Yet There Isn't a Train I Wouldn't Take (Hardcover)

Railway Journeys (Railroads Past and Present)

"Yet there isn't a train I wouldn't take" is a collection of stories about favorite train journeys by an inveterate railway enthusiast and train traveler. A half century career as an engineer, Naval officer, and university administrator took Bill Middleton to almost every part of the globe, and everywhere he took with him an abiding interest in railways, and a notebook and camera to record his experiences. His North American journeys have included experiences as diverse as the long journey north through Manitoba to polar bear country on Hudson Bay, a trip to Minnesota's Mesabi Range to haul a boatload of iron ore to Lake Superior behind a giant Yellowstone articulated steam locomotive, and the trip between Costa Rica's Atlantic and Pacific coasts by narrow gauge railway. His European travels have ranged from a Pullman seat on the crack London-Paris Golden Arrow to the slow trip across Thrace on one of the last runs of the celebrated Simplon-Orient Express. In Asia he traveled through the Toros Mountains of Turkey on the famous Istanbul-Baghdad Toros Express, experienced modern high-speed railroading in the cab of Japan's Bullet Train, and rode to Asia's highest mountain east of the Himalayas on the little trains of Taiwan's Ali Shan Forestry Railway.

William D. Middleton was a 1950 civil engineering graduate from Rensselaer Polytechnic Institute and a professional engineer. He retired from the U.S. Navy's Civil Engineer Corps as a commander in 1979, and then served until 1993 on the general faculty and as the chief facilities officer at the University of Virginia. His published work includes nearly 500 articles for magazines and newspapers in Europe, the United States, and Asia and 15 books, among them Landmarks on the Iron Road and South Shore: The Last Interurban, both published by Indiana University Press.
or
Buy Here
Copyright © 2020 American Booksellers Association