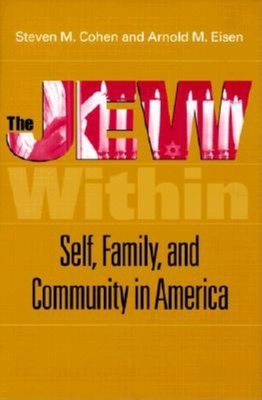 The Jew Within (Hardcover)

Self, Family, and Community in America

"Cohen and Eisen have written that rare work, a book that really matters With clarity and grace, The Jew Within tells the story of how American Jews live and understand their Judaism over the span of their lives, in their families, and among their friends." --Riv-Ellen Prell

". . . a marvelous book. The authors have succeeded in conveying in a very convincing manner the meaning of Jewish identity, Jewish belief, and Jewish practice among a most . . . important sector of American Jews: the baby-boomer generation." --Charles S. Liebman

Rocked by reports of soaring intermarriage rates, rampant assimilation, and diminishing population, the American Jewish community has been concerned with issues of Jewish identification and continuity. What factors shape, nourish, and sustain Jewish commitment? What leads some Jews to place Jewish commitment at the center of their lives, while others consign it to the margins? What matters most to American Jews and why? Through in-depth interviews with Jews across the country, Arnold M. Eisen and Steven M. Cohen, two of the keenest observers and analysts of American Jewish life, probe beneath the surface to explore the foundations of belief and behavior among moderately affiliated American Jews. Among their thought-provoking conclusions are that the construction of Jewish meaning in America is personal and private and that communal loyalties and norms no longer shape Jewish identity as they did several decades ago. The rich and moving personal narratives presented by the authors, accompanied by insightful analysis, raise important questions for all those concerned with the meaning and future of Judaism in American life.

Steven M. Cohen is Associate Professor of Sociology at the Melton Center for Jewish Education, The Hebrew University of Jerusalem. He is author of American Assimilation or Jewish Revival? (Indiana University Press) and co-author (with Charles Liebman) of Two Worlds of Judaism: The Israeli and American Experiences. Arnold M. Eisen is Professor of Religious Studies at Stanford University, a frequent speaker on issues related to contemporary Jewish life before lay and scholarly audiences throughout North America, and an active participant in communal discussions concerning the future of American Judaism. He is the author ofThe Chosen People in America (Indiana University Press), Galut: Modern Jewish Reflection on Homelessness and Homecoming, Taking Hold of Torah: Jewish Commitment and Community in America (Indiana University Press), and winner of a Koret Jewish Book Award.
or support indie stores by buying on
Copyright © 2020 American Booksellers Association