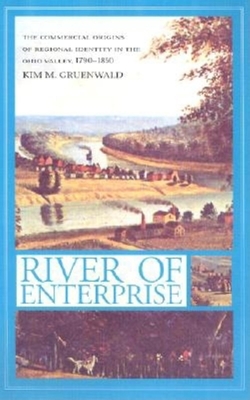 The Commercial Origins of Regional Identity in the Ohio Valley, 1790-1850 (Midwestern History and Culture)

"Gruenwald's book will make the same contribution to historical knowledge of the Ohio Valley as Lewis Atherton's Frontier Merchant did for our understanding of the mercantile Midwest in the mid-nineteenth century.... a finely crafted narrative that lets the reader understand that the Ohio River always served more as an artery, that is, a river of commerce, than a dividing line or boundary." --R. Douglas Hurt, author of The Ohio Frontier

River of Enterprise explores the role the Ohio played in the lives of three generations of settlers from the river's headwaters at Pittsburgh, Pennsylvania, to the falls at Louisville, Kentucky. Part One examines the strategies of colonists who coveted lands "Across the Mountains" as space to be conquered. Part Two traces the emergence of a new region in a valley transformed by commerce as the Ohio River became the artery of movement in "the Western Country." Part Three reveals how relations between neighbors across the river cooled as residents of "the Buckeye State" came to regard the river as the boundary between North and South. From 1790 to 1830, the Ohio River nurtured a regional identity as Americans strove to create an empire based on the ties of commerce in frontier Ohio and Kentucky, and the backcountry of Pennsylvania and Virginia.

The book studies the local, regional, and national connections created by merchants by tracing the business world of the Woodbridge family of Marietta, Ohio. Only as regional commercial concerns gave way to statewide industrial concerns, and as artificial transportation networks such as canals and railroads supplanted the river, did those living to the north define the Ohio as a boundary.