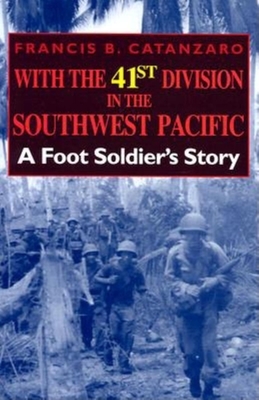 With the 41st Division in the Southwest Pacific (Hardcover)

By Francis B. Catanzaro

" W]e began our advance toward the Mokmer Airstrip. . . . The road climbed a ridge 15 or 20 feet high and we found ourselves on a flat coral plateau sparsely covered by small trees and scrub growth. . . . As we moved westward along the road, two of our destroyers were sailing abreast of the lead elements of the advancing column. The first indication of trouble was the roar of heavy artillery shells sailing over our heads . . . aimed at our destroyers. . . . Shortly after that our forward movement stopped, and we heard heavy firing from the head of the column. . . . As we waited, we began to hear heavy fire from the rear. . . . We were cut off and surrounded "

In the enormous literature of the Second World War, there are surprisingly few accounts of fighting in the southwest Pacific, fewer still by common infantrymen. This memoir, written with a simple and direct honesty that is rare indeed, follows a foot soldier's career from basic training to mustering out. It takes the reader into the jungles and caves of New Guinea and the Philippines during the long campaign to win the war against Japan. From basic training at Camp Roberts through combat, occupation, and the long journey home, Francis Catanzaro's account tells of the excitement, misery, cruelty, and terror of combat, and of the uneasy boredom of jungle camp life. A member of the famed 41st Infantry Brigade, the "Jungleers," Catanzaro saw combat at Hollandia, Biak, Zamboanga, and Mindanao. He was a part of the Japanese occupation force and writes with feeling about living among his former enemies and of the decision to drop the atom bomb. With the 41st Division in the Southwest Pacific is a powerful, gritty, and moving narrative of the life of a soldier during some of the most difficult fighting of World War II.

After receiving his discharge from the U.S. Army, Francis B. Catanzaro attended St. Louis University, where he earned a B.S. in Chemistry. He then married "the girl across the street." They have three children and seven grandchildren. He spent most of his business career with Boise Cascade, where he was employed as Quality Assurance Manager and Laboratory Manager.
or support indie stores by buying on
Copyright © 2020 American Booksellers Association