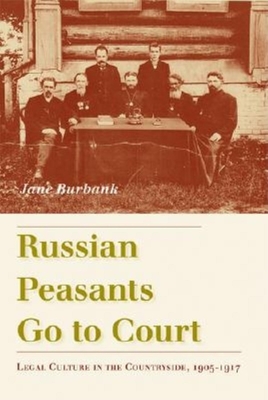 "... a major contribution to our understanding both of the dynamic of change within the peasantry and of legal development in late Imperial Russia." --William G. Wagner

Russian Peasants Go to Court brings into focus the legal practice of Russian peasants in the township courts of the Russian empire from 1905 through 1917. Contrary to prevailing conceptions of peasants as backward, drunken, and ignorant, and as mistrustful of the state, Jane Burbank's study of court records reveals engaged rural citizens who valued order in their communities and made use of state courts to seek justice and to enforce and protect order. Through narrative studies of individual cases and statistical analysis of a large body of court records, Burbank demonstrates that Russian peasants made effective use of legal opportunities to settle disputes over economic resources, to assert personal dignity, and to address the bane of small crimes in their communities. The text is enhanced by contemporary photographs and lively accounts of individual court cases.

Jane Burbank is Professor of History and Russian and Slavic Studies at New York University. She is author of Intelligentsia and Revolution: Russian Views of Bolshevism, 1917-1922 and co-editor (with David L. Ransel) of Imperial Russia: New Histories for the Empire (IUP, 1998).
or
Buy Here
Copyright © 2020 American Booksellers Association