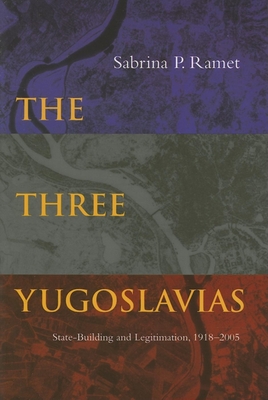 Yugoslavia exploded onto the front pages of world newspapers in the early 1990s. The War of Yugoslav Succession of 1991-1995 convinced many that interethnic violence was endemic to politics in Yugoslavia and that the Yugoslav meltdown had occurred because of ancient hatreds. In this thematic history of Yugoslavia in the 20th century, Sabrina P. Ramet demonstrates that, on the contrary, the instability of the three 20th-century Yugoslav states--the interwar kingdom (1918-41), socialist Yugoslavia (1945-91), and the rump Yugoslav state created in 1992, consisting of Serbia and Montenegro--can be attributed to the failure of succeeding governments to establish the rule of law and political legitimacy. Ramet places emphasis on the failure of the state-building project and the absence of political legitimation, rather than on ineluctable or abstract historical forces. Based on extensive archival research and fieldwork and the culmination of more than two decades of study, The Three Yugoslavias is a major contribution to an understanding of Yugoslavia and its successor states.

Sabrina P. Ramet is Professor of Political Science at the Norwegian University of Science and Technology in Trondheim, Norway, and Senior Associate of the Centre for the Study of Civil War of the Peace Research Institute in Oslo (PRIO). She is the author of eight previous books, including Nationalism and Federalism in Yugoslavia (IUP, 1992).
Loading...
or support indie stores by buying on