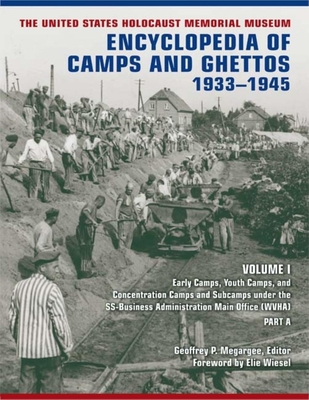 This monumental 7-volume encyclopedia, the result of years of work by the Jack, Joseph, and Morton Mandel Center for Advanced Holocaust Studies at the United States Holocaust Memorial Museum, will describe the universe of camps and ghettos--some 20,000 in all--that the Nazis and their allies operated, from Norway to North Africa and from France to Russia. For the first time, a single reference work will provide detailed information on each individual site.

This first volume covers three groups of camps: the early camps that the Nazis established in the first year of Hitler's rule, the major SS concentration camps with their constellations of subcamps, and the special camps for Polish and German children and adolescents. Overview essays provide context for each category, while each camp entry provides basic information about the site's purpose; the prisoners, guards, working and living conditions; and key events in the camp's history. Material from personal testimonies helps convey the character of the site, while source citations provide a path to additional information.

Geoffrey P. Megargee is an applied research scholar at the Jack, Joseph, and Morton Mandel Center for Advanced Holocaust Studies, United States Holocaust Memorial Museum. He is author of War of Annihilation: Combat and Genocide on the Eastern Front, 1941 and Inside Hitler's High Command.
or support indie stores by buying on
Copyright © 2020 American Booksellers Association