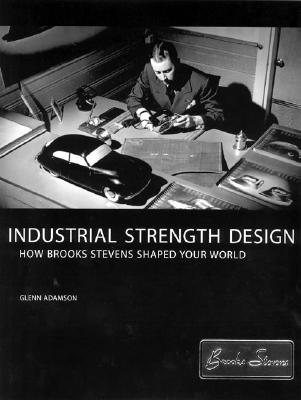 How Brooks Stevens Shaped Your World

The first publication documenting the work of Brooks Stevens, one of America's most influential twentieth-century designers.

Industrial Strength Design: How Brooks Stevens Shaped Your World is a long overdue introduction to the work of visionary industrial designer Brooks Stevens (1911-1995). Believing that an industrial designer should be a businessman, an engineer, and a stylist, in that order, Stevens created thousands of ingenious and beautiful designs for industrial and household products--including a clothes dryer with a window in the front, a wide-mouthed peanut butter jar, and the Oscar Mayer Wienermobile. (There's nothing more aerodynamic than a wiener, he explained.) He invented a precursor to the SUV by turning a Jeep into a station wagon after World War II, and streamlined steam irons so that they resembled aircraft. It was Brooks Stevens who, in 1954, coined the phrase planned obsolescence, defining it as instilling in the buyer the desire to own something a little newer, a little better, a little sooner than is necessary. This concept has since been blamed for everything from toasters that stop working to today's throwaway culture, but Stevens was simply recognizing the intentionally ephemeral nature of a designer's work. Asked once to name his favorite design, he replied, none, because every one would have to be restudied for the tastes of tomorrow.

This book, which accompanied an exhibit at the Milwaukee Art Museum (the repository for Stevens's papers), includes 250 illustrations of designs by Stevens and his firm, many in color. Glenn Adamson, exhibition curator, contributes detailed studies of individual designs. John Heskett, Kristina Wilson, and Jody Clowes contribute interpretive essays. Also included are a description of the Brooks Stevens Archive and several key writings by Brooks Stevens.

J. Steven Svoboda, J.D., is Founder and Executive Director of Attorneys for the Rights of the Child. He practices human rights law in Berkeley, California. He has published articles in the Journal of Medical Ethics, the Journal of Health Psychology, and contributed to Understanding Circumcision (Kluwer Academic Publishers, 2001). His 2001 presentation to a United Nations meeting in Geneva became the first official U.N. document entirely devoted to the subject of male circumcision as a human rights violation.
or
Not Currently Available for Direct Purchase
Copyright © 2020 American Booksellers Association