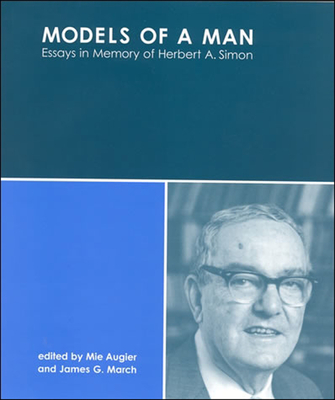 Models of a Man (Hardcover)

Essays in Memory of Herbert A. Simon

Essays that pay tribute to the wide-ranging influence of the late Herbert Simon, by friends and colleagues.

Herbert Simon (1916-2001), in the course of a long and distinguished career in the social and behavioral sciences, made lasting contributions to many disciplines, including economics, psychology, computer science, and artificial intelligence. In 1978 he was awarded the Nobel Prize in economics for his research into the decision-making process within economic organizations. His well-known book The Sciences of the Artificial addresses the implications of the decision-making and problem-solving processes for the social sciences.

This book (the title is a variation on the title of Simon's autobiography, Models of My Life) is a collection of short essays, all original, by colleagues from many fields who felt Simon's influence and mourn his loss. Mixing reminiscence and analysis, the book represents "a small acknowledgment of a large debt."

Each of the more than forty contributors was asked to write about the one work by Simon that he or she had found most influential. The editors then grouped the essays into four sections: "Modeling Man," "Organizations and Administration," "Modeling Systems," and "Minds and Machines." The contributors include such prominent figures as Kenneth Arrow, William Baumol, William Cooper, Gerd Gigerenzer, Daniel Kahneman, David Klahr, Franco Modigliani, Paul Samuelson, and Vernon Smith. Although they consider topics as disparate as "Is Bounded Rationality Unboundedly Rational?" and "Personal Recollections from 15 Years of Monthly Meetings," each essay is a testament to the legacy of Herbert Simon--to see the unity rather than the divergences among disciplines.

Mie Augier is a postdoctoral fellow at Stanford University.
or
Not Currently Available for Direct Purchase
Copyright © 2020 American Booksellers Association