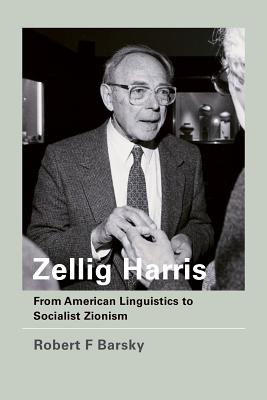 From American Linguistics to Socialist Zionism

In 1995, Robert Barsky met with Noam Chomsky to discuss hiswork-in-progress, Noam Chomsky: A Life of Dissent (MIT Press, 1997). Chomsky told Barsky that he shouldfocus his attention instead on midcentury linguist and activist Zellig Harris, who was, Chomsky modestly insisted, more interesting than Chomsky himself. Intrigued, Barsky began to research Harris (1909-1992) and discovered thestory of a major figure in American intellectual life sitting in a corner in the middle of the room--part of crucial twentieth-century conversations about language, technology, labor, politics, and Zionism. The intersecting worlds of Harris's intellectualand political activities were populated by such figures as Louis Brandeis, Albert Einstein, Franz Boas, Nathan Glazer, and Chomsky.

Barsky describes Harris's work in language studies, and his pioneering ideas about discourse analysis, structural linguistics, and information representation. He also discusses Harris's part in the pre-1948 Zionist movement--when many Jews on the Left envisioned a socialist Palestine that would be a haven not only for persecuted Jews but also for disenfranchised Arabs and anyone seeking a sanctuary against oppression--and recounts Harris's debates on the subject with Brandeis, Einstein, and a large group of students involved with a Zionist organization called Avukah. And Barsky describes Harris's views on capitalism, worker-owner relations, and worker self-management, the legacy ofwhich can be found in some of his students' writings, notably those of Seymour Melman. Barsky shows how Harris, as mentor, teacher, and colleague, powerfully influenced figures who came to dominate the twentieth century's political discussion--; thinkers as different as Noam Chomsky and Nathan Glazer.

Robert F. Barsky is Professor of English, French, European, and Jewish Studies at Vanderbilt University. He is the author of Noam Chomsky: A Life of Dissent (1997, 1998) and The Chomsky Effect: A Radical Works Beyond the Ivory Tower(2007, 2009), both published by the MIT Press.
Loading...
or
Not Currently Available for Direct Purchase