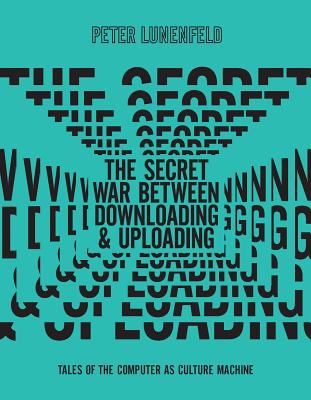 The Secret War Between Downloading and Uploading

Tales of the Computer as Culture Machine

As we hurtle into the twenty-first century, will we be passive downloaders of content or active uploaders of meaning?

The computer, writes Peter Lunenfeld, is the twenty-first century's culture machine. It is a dream device, serving as the mode of production, the means of distribution, and the site of reception. We haven't quite achieved the flying cars and robot butlers of futurist fantasies, but we do have a machine that can function as a typewriter and a printing press, a paintbrush and a gallery, a piano and a radio, the mail as well as the mail carier. But, warns Lunenfeld, we should temper our celebration with caution; we are engaged in a secret war between downloading and uploading--between passive consumption and active creation--and the outcome will shape our collective futures.

In The Secret War Between Downloading and Uploading, Lunenfeld makes his case for using digital technologies to shift us from a consumption to a production model. He describes television as the "the high fructose corn syrup of the imagination" and worries that it can cause "cultural diabetes"; prescribes mindful downloading, meaningful uploading, and "info-triage" as cures; and offers tips for crafting "bespoke futures" in what he terms the era of "Web n.0" (interconnectivity to the nth power). He also offers a stand-alone genealogy of digital visionaries, distilling a history of the culture machine that runs from the Patriarchs (Vannevar Bush's WWII generation) to the Hustlers (Bill Gates and Steve Jobs) to the Searchers (Larry Page and Sergey Brin of Google fame). After half a century of television-conditioned consumption/downloading, Lunenfeld tells us, we now find ourselves with a vast new infrastructure for uploading. We simply need to find the will to make the best of it.

Peter Lunenfeld is a Professor in the Design Media Arts Department at UCLA. He is the author of Snap to Grid: A User's Guide to Digital Arts, Media, and Cultures (2000, 2001) and User: InfoTechnoDemo (2005), both published by the MIT Press.
Loading...
or
Not Currently Available for Direct Purchase