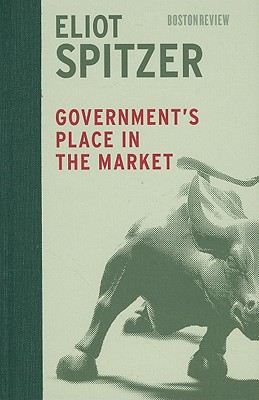 Government's Place in the Market (Hardcover)

In his first book, the former New York governor and current CNN cohost offers a manifesto on the economy and the public interest.

As New York State Attorney General from 1998 to 2006, Eliot Spitzer successfully pursued corporate crime, including stock price inflation, securities fraud, and predatory lending practices. Drawing on those experiences, in this book Spitzer considers when and how the government should intervene in the workings of the market. The 2009 American bank bailout, he argues, was the wrong way: it understandably turned government intervention into a flashpoint for public disgust because it socialized risk, privatized benefit, and left standing institutions too big to fail, incompetent regulators, and deficient corporate governance. That's unfortunate, because good regulatory policy, he claims, can make markets and firms work efficiently, equitably, and in service of fundamental public values. Spitzer lays out the right reasons for government intervention in the market: to guarantee transparency, to overcome market failures, and to guard our core values against the market's unfair biases such as racism. With specific proposals to serve those ends--from improving corporate governance to making firms responsible for their own risky behavior--he offers a much-needed blueprint for the proper role of government in the market. Finally, taking account of regulatory changes since the crash of 2008, he suggests how to rebuild public trust in government so real change is possible. Responses to Spitzer by Sarah Binder, Andrew Gelman, and John Sides, Dean Baker, and Robert Johnson, raise issues of politics, ideology, and policy.

Eliot Spitzer served as the 54th Governor of New York fromJanuary 2007 until his resignation on March 17, 2008. In October 2010 he willlaunch a talk show on CNN with conservative analyst Kathleen Parker.
or
Not Currently Available for Direct Purchase
Copyright © 2020 American Booksellers Association