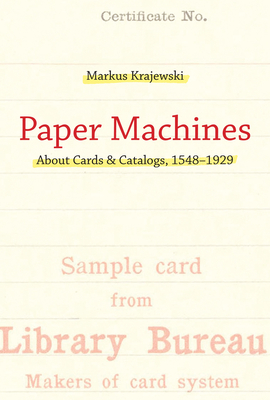 About Cards & Catalogs, 1548-1929 (History and Foundations of Information Science)

Why the card catalog—a “paper machine” with rearrangeable elements—can be regarded as a precursor of the computer.

Today on almost every desk in every office sits a computer. Eighty years ago, desktops were equipped with a nonelectronic data processing machine: a card file. In Paper Machines, Markus Krajewski traces the evolution of this proto-computer of rearrangeable parts (file cards) that became ubiquitous in offices between the world wars.

The story begins with Konrad Gessner, a sixteenth-century Swiss polymath who described a new method of processing data: to cut up a sheet of handwritten notes into slips of paper, with one fact or topic per slip, and arrange as desired. In the late eighteenth century, the card catalog became the librarian's answer to the threat of information overload. Then, at the turn of the twentieth century, business adopted the technology of the card catalog as a bookkeeping tool. Krajewski explores this conceptual development and casts the card file as a “universal paper machine” that accomplishes the basic operations of Turing's universal discrete machine: storing, processing, and transferring data. In telling his story, Krajewski takes the reader on a number of illuminating detours, telling us, for example, that the card catalog and the numbered street address emerged at the same time in the same city (Vienna), and that Harvard University's home-grown cataloging system grew out of a librarian's laziness; and that Melvil Dewey (originator of the Dewey Decimal System) helped bring about the technology transfer of card files to business.


Praise For Paper Machines: About Cards & Catalogs, 1548-1929 (History and Foundations of Information Science)…

Markus Krajewski has done the history of cataloguing and the history of information management a considerable service: I recommend it highly.—Professor Tom Wilson, Editor-in-Chief, Information Research—

Markus Krajewski is Associate Professor of Media History at the Bauhaus University, Weimar. He is a developer of the bibliographic software Synapsen: A Hypertextual Card Index (www.verzetteln.de/synapsen)
Loading...
or
Not Currently Available for Direct Purchase