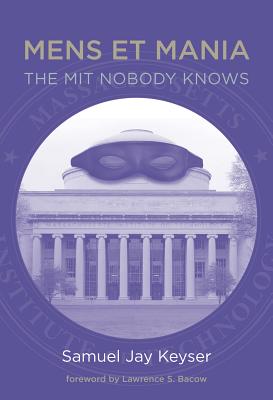 The MIT Nobody Knows

A memoir of MIT life, from being Noam Chomsky's boss to negotiating with student protesters.

When Jay Keyser arrived at MIT in 1977 to head the Department of Linguistics and Philosophy, he writes, he felt like a fish that had been introduced to water for the first time. At MIT, a colleague grabbed him by the lapels to discuss dark matter; Noam Chomsky called him boss (double SOB spelled backward?); and engaging in conflict resolution made him feel like a marriage counselor trying to reconcile a union between a Jehovah's witness and a vampire. In Mens et Mania, Keyser recounts his academic and administrative adventures during a career of more than thirty years.

Keyser describes the administrative side of his MIT life, not only as department head but also as Associate Provost and Special Assistant to the Chancellor. Keyser had to run a department (budgets were like horoscopes) and negotiate student grievances--from the legality of showing Deep Throat in a dormitory to the uproar caused by the arrests of students for anti-apartheid demonstrations. Keyser also describes a visiting Japanese delegation horrified by the disrepair of the linguistics department offices (Chomsky tells them Our motto is: Physically shabby. Intellectually first class.); convincing a student not to jump off the roof of the Green Building; and recent attempts to look at MIT through a corporate lens. And he explains the special faculty-student bond at MIT: the faculty sees the students as themselves thirty years earlier.

Keyser observes that MIT is hard to get into and even harder to leave, for faculty as well as for students. Writing about retirement, Keyser quotes the song Groucho Marx sang in Animal Crackers as he was leaving a party--Hello, I must be going. Students famously say Tech is hell. Keyser says, It's been a helluva party.

This entertaining and thought-provoking memoir will make readers glad that Keyser hasn't quite left.