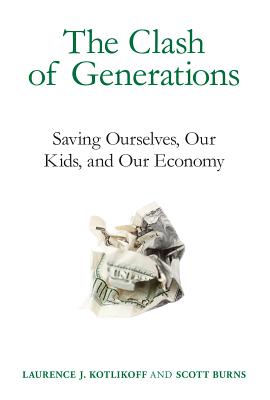 The Clash of Generations

Saving Ourselves, Our Kids, and Our Economy

How America went bankrupt and how we can save ourselves--as a country and as individuals--from economic disaster.

The United States is bankrupt, flat broke. Thanks to accounting that would make Enron blush, America's insolvency goes far beyond what our leaders are disclosing. The United States is a fiscal basket case, in worse shape than the notoriously bailed-out countries of Greece, Ireland, and others. How did this happen? InThe Clash of Generations, experts Laurence Kotlikoff and Scott Burns document our six-decade, off-balance-sheet, unsustainable financing scheme. They explain how we have balanced our longer lives on the backs of our (relatively few) children. At the same time, we've been on a consumption spree, saving and investing less than nothing. And that's not to mention the evisceration of the middle class and a financial system that has proven it can't be trusted. Kotlikoff and Burns outline grassroots strategies for saving ourselves--and especially our children--from what could be a truly catastrophic financial collapse.

Kotlikoff and Burns sounded the alarm in their widely acclaimedThe Coming Generational Storm, but politicians didn't listen. Now the need for action is even more urgent. It's up to us to demand radical reform of our tax system, our healthcare system, and our Social Security system, and to insist on better paths to investment return than those provided by Wall Street (mis)managers. Kotlikoff and Burns's Purple Plans (so called because they will appeal to both Republicans and Democrats) have been endorsed by a who's who of economists and offer a new way forward; and their revolutionary investment strategy for individuals replaces the idea of financial capital with life decision capital.

Of course, we won't be doing all this just for ourselves. We need to fix America's fiscal mess before our kids inherit it.

Laurence J. Kotlikoff, one of the nation's leading experts on fiscal policy, national saving, and personal finance and a columnist for Bloomberg, is Professor of Economics at Boston University. Scott Burns's personal finance column has been nationally syndicated since 1981. He is Chief Investment Strategist for AssetBuilder, an Internet-based registered investment advisory firm. Kotlikoff and Burns are the coauthors of The Coming Generational Storm: What You Need to Know about America's Economic Future (MIT Press).
or
Not Currently Available for Direct Purchase