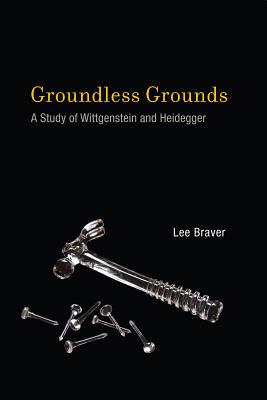 A Study of Wittgenstein and Heidegger

An in-depth comparison of Wittgenstein and Heidegger shows how the views of both philosophers emerge from a fundamental attempt to dispense with the transcendent.

Ludwig Wittgenstein and Martin Heidegger are two of the most important--and two of the most difficult--philosophers of the twentieth century, indelibly influencing the course of continental and analytic philosophy, respectively. In Groundless Grounds, Lee Braver argues that the views of both thinkers emerge from a fundamental attempt to create a philosophy that has dispensed with everything transcendent so that we may be satisfied with the human. Examining the central topics of their thought in detail, Braver finds that Wittgenstein and Heidegger construct a philosophy based on originalfinitude--finitude without the contrast of the infinite.

In Braver's elegant analysis, these two difficult bodies of work offer mutual illumination rather than compounded obscurity. Moreover, bringing the most influential thinkers in continental and analytic philosophy into dialogue with each other may enable broader conversations between these two divergent branches of philosophy.

Braver's meticulously researched and strongly argued account shows that both Wittgenstein and Heidegger strive to construct a new conception of reason, free of the illusions of the past and appropriate to the kind of beings that we are. Readers interested in either philosopher, or concerned more generally with the history of twentieth-century philosophy as well as questions of the nature of reason, will find Groundless Grounds of interest.

Lee Braver is Associate Professor and Chair of the Department of Philosophy at Hiram College in Ohio. He is the author of a number of articles and two previous books, A Thing of This World: A History of Continental Anti-Realism and Heidegger's Later Writings: A Reader's Guide.
Loading...
or
Not Currently Available for Direct Purchase