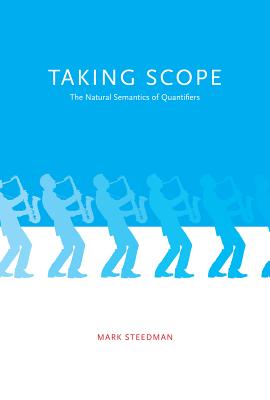 The Natural Semantics of Quantifiers

A novel view of the syntax and semantics of quantifier scope that argues for a "combinatory" theory of natural language syntax.

In Taking Scope, Mark Steedman considers the syntax and semantics of quantifier scope in interaction with negation, polarity, coordination, and pronominal binding, among other constructions. The semantics is "surface compositional," in that there is a direct correspondence between syntactic types and operations of composition and types and compositions at the level of logical form. In that sense, the semantics is in the "natural logic" tradition of Aristotle, Leibniz, Frege, Russell, and others who sought to define a psychologically real logic directly reflecting natural language grammar.

The book reunites the generative-transformational tradition initiated by Chomsky--which views the formal syntactic component as entirely autonomous---with the older, strongly lexicalist, construction-based tradition, which has sought to define a more lingistically transparent theory of meaning representation. Steedman offers a logical formalism that relates directly to the surface form of language and to the process of inference and proof that it must support. Such a natural logic, although formal by definition, should be allowed to grow organically from attested language phenomena rather than be axiomatized a priori in terms of any standard logic. Steedman also considers the application of natural semantic interpretations to practical natural language processing tasks, emphasizing throughout the elimination of traditional quantifiers from semantic formalism in favor of devices such as Skolem terms and structure-sharing among representations in processing.

Mark Steedman is Professor of Cognitive Science in the Division of Informatics at the University of Edinburgh. He is the author of Surface Structure and Interpretation (1996) and The Syntactic Process (2000), both published by the MIT Press.
Loading...
or
Not Currently Available for Direct Purchase