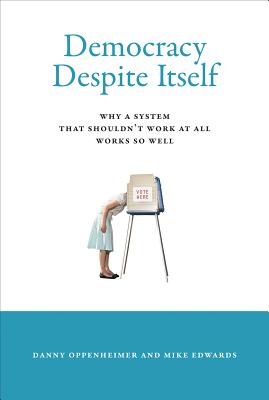 Why a System That Shouldn't Work at All Works So Well

Why democracy is the most effective form of government despite irrational (and sometime oblivious) voters and flawed (and sometimes inept) politicians.

Voters often make irrational decisions based on inaccurate and irrelevant information. Politicians are often inept, corrupt, or out of touch with the will of the people. Elections can be determined by the design of the ballot and the gerrymandered borders of a district. And yet, despite voters who choose candidates according to the boxer-brief dichotomy and politicians who struggle to put together a coherent sentence, democracy works exceptionally well: citizens of democracies are healthier, happier, and freer than citizens of other countries. In Democracy Despite Itself, Danny Oppenheimer, a psychologist, and Mike Edwards, a political scientist, explore this paradox: How can democracy lead to such successful outcomes when the defining characteristic of democracy--elections--is so flawed?

Oppenheimer and Edwards argue that democracy works because regular elections, no matter how flawed, produce a variety of unintuitive, positive consequences. The brilliance of democracy, write Oppenheimer and Edwards, does not lie in the people's ability to pick superior leaders. It lies in the many ways that it subtly encourages the flawed people and their flawed leaders to work toward building a better society.

Mike Edwards founded and regularly contributes to Leftfielder.org, a blog on politics and media.
Loading...
or
Not Currently Available for Direct Purchase