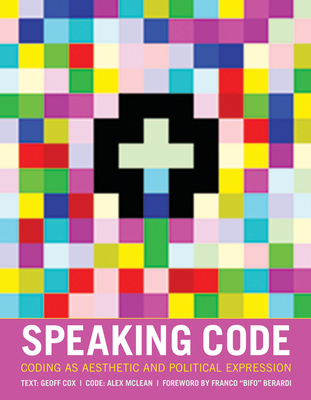 The aesthetic and political implications of working with code as procedure, expression, and action.

Speaking Code begins by invoking the “Hello World” convention used by programmers when learning a new language, helping to establish the interplay of text and code that runs through the book. Interweaving the voice of critical writing from the humanities with the tradition of computing and software development, in Speaking Code Geoff Cox formulates an argument that aims to undermine the distinctions between criticism and practice and to emphasize the aesthetic and political implications of software studies.

Not reducible to its functional aspects, program code mirrors the instability inherent in the relationship of speech to language; it is only interpretable in the context of its distribution and network of operations. Code is understood as both script and performance, Cox argues, and is in this sense like spoken language—always ready for action.

Speaking Code examines the expressive and performative aspects of programming; alternatives to mainstream development, from performances of the live-coding scene to the organizational forms of peer production; the democratic promise of social media and their actual role in suppressing political expression; and the market's emptying out of possibilities for free expression in the public realm. Cox defends language against its invasion by economics, arguing that speech continues to underscore the human condition, however paradoxical this may seem in an era of pervasive computing.

Geoff Cox is Associate Professor in the Department of Aesthetics and Communications at Aarhus University, Denmark.

Alex McLean is a Research Fellow at ICSRiM (the Interdisciplinary Centre for Scientific Research in Music) at the University of Leeds, a live coder, and software artist.

Franco Berardi, aka “Bifo,” founder of the famous “Radio Alice” in Bologna and an important figure of the Italian Autonomia Movement, is a writer, media theorist, and media activist. He currently teaches Social History of the Media at the Accademia di Brera, Milan.
Loading...
or
Not Currently Available for Direct Purchase