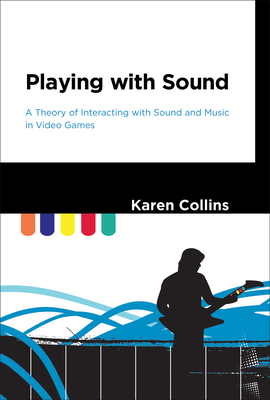 A Theory of Interacting with Sound and Music in Video Games

An examination of the player's experience of sound in video games and the many ways that players interact with the sonic elements in games.

In Playing with Sound, Karen Collins examines video game sound from the player's perspective. She explores the many ways that players interact with a game's sonic aspects—which include not only music but also sound effects, ambient sound, dialogue, and interface sounds—both within and outside of the game. She investigates the ways that meaning is found, embodied, created, evoked, hacked, remixed, negotiated, and renegotiated by players in the space of interactive sound in games.

Drawing on disciplines that range from film studies and philosophy to psychology and computer science, Collins develops a theory of interactive sound experience that distinguishes between interacting with sound and simply listening without interacting. Her conceptual approach combines practice theory (which focuses on productive and consumptive practices around media) and embodied cognition (which holds that our understanding of the world is shaped by our physical interaction with it).

Collins investigates the multimodal experience of sound, image, and touch in games; the role of interactive sound in creating an emotional experience through immersion and identification with the game character; the ways in which sound acts as a mediator for a variety of performative activities; and embodied interactions with sound beyond the game, including machinima, chip-tunes, circuit bending, and other practices that use elements from games in sonic performances.

Karen Collins is Associate Professor in the Department of Communication Arts at the University of Waterloo. She is the author of ten books on sound, including Game Sound and Playing with Sound (both published by the MIT Press), and is the director of the film Beep: A Documentary History of Game Sound.
Loading...
or
Not Currently Available for Direct Purchase