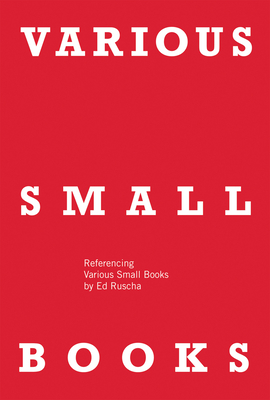 In the 1960s and 1970s, the artist Ed Ruscha created a series of small photo-conceptual artist's books, among them Twentysix Gas Stations, Various Small Fires, Every Building on the Sunset Strip, Thirtyfour Parking Lots, Real Estate Opportunities, and A Few Palm Trees. Featuring mundane subjects photographed prosaically, with idiosyncratically deadpan titles, these "small books" were sought after, collected, and loved by Ruscha's fans and fellow artists. Over the past thirty years, close to 100 other small books that appropriated or paid homage to Ruscha's have appeared throughout the world. This book collects ninety-one of these projects, showcasing the cover and sample layouts from each along with a description of the work. It also includes selections from Ruscha's books and an appendix listing all known Ruscha book tributes.

These small books revisit, imitate, honor, and parody Ruscha in form, content, and title. Some rephotograph his subjects: Thirtyfour Parking Lots, Forty Years Later. Some offer a humorous variation: Various Unbaked Cookies (which concludes, as did Ruscha's Various Small Fires, with a glass of milk), Twentynine Palms (twenty-nine photographs of palm-readers' signs). Some say something different: None of the Buildings on Sunset Strip. Some reach for a connection with Ruscha himself: 17 Parked Cars in Various Parking Lots Along Pacific Coast Highway Between My House and Ed Ruscha's.

With his books, Ruscha expanded the artist's field of permissible subjects, approaches, and methods. With VARIOUS SMALL BOOKS, various artists pay tribute to Ed Ruscha and extend the legacy of his books.

Jeff Brouws is a photographer whose work is in many private and public collections, including Harvard's Fogg Museum, the Los Angeles County Museum of Art, Princeton University Art Museum, and the Whitney Museum of American Art. His homages to Ruscha include Twentysix Abandoned Gas Stations. Wendy Burton is a photographer whose work is in such collections as the San Francisco Museum of Art, the Santa Barbara Museum of Art, and the University of Louisville Photographic Archive. Her homage to Ruscha is Real Estate Opportunities. Hermann Zschiegner is a principal in the award-winning New York-based design agency TWO-N, a member of the ABC Artists' Book Cooperative, and the author of Thirtyfour Parking Lots on Google Earth.
or
Not Currently Available for Direct Purchase
Copyright © 2020 American Booksellers Association