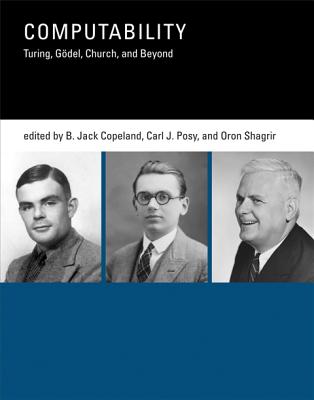 Turing, Godel, Church, and Beyond

In the 1930s a series of seminal works published by Alan Turing, Kurt Godel, Alonzo Church, and others established the theoretical basis for computability. This work, advancing precise characterizations of effective, algorithmic computability, was the culmination of intensive investigations into the foundations of mathematics. In the decades since, the theory of computability has moved to the center of discussions in philosophy, computer science, and cognitive science. In this volume, distinguished computer scientists, mathematicians, logicians, and philosophers consider the conceptual foundations of computability in light of our modern understanding. Some chapters focus on the pioneering work by Turing, Godel, and Church, including the Church-Turing thesis and Godel's response to Church's and Turing's proposals. Other chapters cover more recent technical developments, including computability over the reals, Godel's influence on mathematical logic and on recursion theory and the impact of work by Turing and Emil Post on our theoretical understanding of online and interactive computing; and others relate computability and complexity to issues in the philosophy of mind, the philosophy of science, and the philosophy of mathematics.