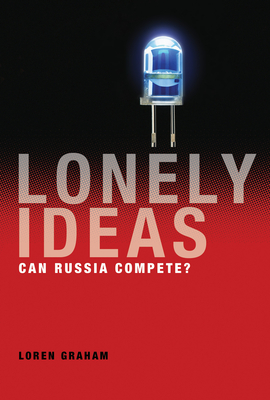 An expert investigates Russia's long history of technological invention followed by commercial failure and points to new opportunities to break the pattern.

When have you gone into an electronics store, picked up a desirable gadget, and found that it was labeled "Made in Russia"? Probably never. Russia, despite its epic intellectual achievements in music, literature, art, and pure science, is a negligible presence in world technology. Despite its current leaders' ambitions to create a knowledge economy, Russia is economically dependent on gas and oil. In Lonely Ideas, Loren Graham investigates Russia's long history of technological invention followed by failure to commercialize and implement.

For three centuries, Graham shows, Russia has been adept at developing technical ideas but abysmal at benefiting from them. From the seventeenth-century arms industry through twentieth-century Nobel-awarded work in lasers, Russia has failed to sustain its technological inventiveness. Graham identifies a range of conditions that nurture technological innovation: a society that values inventiveness and practicality; an economic system that provides investment opportunities; a legal system that protects intellectual property; a political system that encourages innovation and success. Graham finds Russia lacking on all counts. He explains that Russia's failure to sustain technology, and its recurrent attempts to force modernization, reflect its political and social evolution and even its resistance to democratic principles.

But Graham points to new connections between Western companies and Russian researchers, new research institutions, a national focus on nanotechnology, and the establishment of Skolkovo, "a new technology city." Today, he argues, Russia has the best chance in its history to break its pattern of technological failure.

Loren Graham, often described as the leading scholar on Russian science and technology outside that country, is the author of The Ghost of the Executed Engineer and other books. He is Professor Emeritus of the History of Science at MIT and Research Scholar at the Davis Center for Russia and Eurasian Studies at Harvard.
or
Not Currently Available for Direct Purchase
Copyright © 2020 American Booksellers Association