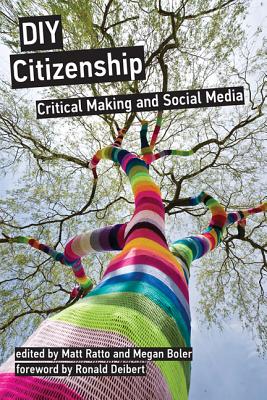 How social media and DIY communities have enabled new forms of political participation that emphasize doing and making rather than passive consumption.

Today, DIY--do-it-yourself--describes more than self-taught carpentry. Social media enables DIY citizens to organize and protest in new ways (as in Egypt's "Twitter revolution" of 2011) and to repurpose corporate content (or create new user-generated content) in order to offer political counternarratives. This book examines the usefulness and limits of DIY citizenship, exploring the diverse forms of political participation and "critical making" that have emerged in recent years. The authors and artists in this collection describe DIY citizens whose activities range from activist fan blogging and video production to knitting and the creation of community gardens.

Contributors examine DIY activism, describing new modes of civic engagement that include Harry Potter fan activism and the activities of the Yes Men. They consider DIY making in learning, culture, hacking, and the arts, including do-it-yourself media production and collaborative documentary making. They discuss DIY and design and how citizens can unlock the black box of technological infrastructures to engage and innovate open and participatory critical making. And they explore DIY and media, describing activists' efforts to remake and reimagine media and the public sphere. As these chapters make clear, DIY is characterized by its emphasis on "doing" and making rather than passive consumption. DIY citizens assume active roles as interventionists, makers, hackers, modders, and tinkerers, in pursuit of new forms of engaged and participatory democracy.

Megan Boler is Professor in the Ontario Institute for Studies in Education at the University of Toronto and editor of Digital Media and Democracy: Tactics in Hard Times (MIT Press).
or
Not Currently Available for Direct Purchase