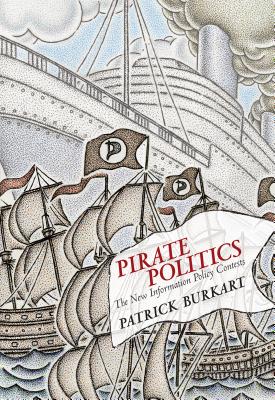 An examination of the Pirate political movement in Europe analyzes its advocacy for free expression and the preservation of the Internet as a commons.

The Swedish Pirate Party emerged as a political force in 2006 when a group of software programmers and file-sharing geeks protested the police takedown of The Pirate Bay, a Swedish file-sharing search engine. The Swedish Pirate Party, and later the German Pirate Party, came to be identified with a "free culture" message that came into conflict with the European Union's legal system. In this book, Patrick Burkart examines the emergence of Pirate politics as an umbrella cyberlibertarian movement that views file sharing as a form of free expression and advocates for the preservation of the Internet as a commons. He links the Pirate movement to the Green movement, arguing that they share a moral consciousness and an explicit ecological agenda based on the notion of a commons, or public domain. The Pirate parties, like the Green Party, must weigh ideological purity against pragmatism as they move into practical national and regional politics.

Burkart uses second-generation critical theory and new social movement theory as theoretical perspectives for his analysis of the democratic potential of Pirate politics. After setting the Pirate parties in conceptual and political contexts, Burkart examines European antipiracy initiatives, the influence of the Office of the U.S. Trade Representative, and the pressure exerted on European governance by American software and digital exporters. He argues that pirate politics can be seen as "cultural environmentalism," a defense of Internet culture against both corporate and state colonization.

Patrick Burkart is Associate Professor in the Department of Communication at Texas A&M University and the author of Music and Cyberliberties and Digital Music Wars: Ownership and Control of the Celestial Jukebox (with Tom McCourt).
or
Not Currently Available for Direct Purchase
Copyright © 2020 American Booksellers Association