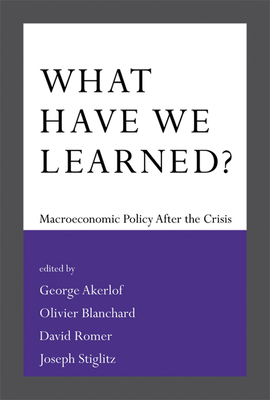 What Have We Learned? (Hardcover)

Top economists consider how to conduct policy in a world where previous beliefs have been shattered by the recent financial and economic crises.

Since 2008, economic policymakers and researchers have occupied a brave new economic world. Previous consensuses have been upended, former assumptions have been cast into doubt, and new approaches have yet to stand the test of time. Policymakers have been forced to improvise and researchers to rethink basic theory. George Akerlof, Nobel Laureate and one of this volume's editors, compares the crisis to a cat stuck in a tree, afraid to move. In April 2013, the International Monetary Fund brought together leading economists and economic policymakers to discuss the slowly emerging contours of the macroeconomic future. This book offers their combined insights.

The editors and contributors--who include the Nobel Laureate and bestselling author Joseph Stiglitz, Federal Reserve Vice Chair Janet Yellen, and the former Governor of the Bank of Israel Stanley Fischer--consider the lessons learned from the crisis and its aftermath. They discuss, among other things, post-crisis questions about the traditional policy focus on inflation; macroprudential tools (which focus on the stability of the entire financial system rather than of individual firms) and their effectiveness; fiscal stimulus, public debt, and fiscal consolidation; and exchange rate arrangements.