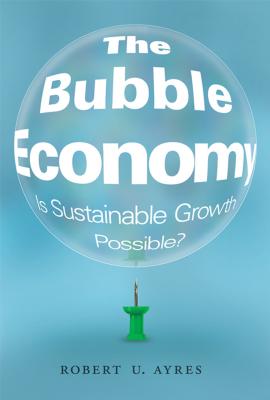 By Robert U. Ayres

Why the global economy has become increasingly unstable, and how financial "de-carbonization" could break the pattern of bubble-driven wealth destruction.

The global economy has become increasingly, perhaps chronically, unstable. Since 2008, we have heard about the housing bubble, subprime mortgages, banks "too big to fail," financial regulation (or the lack of it), and the European debt crisis. Wall Street has discovered that it is more profitable to make money from other people's money than by investing in the real economy, which has limited access to capital--resulting in slow growth and rising inequality. What we haven't heard much about is the role of natural resources--energy in particular--as drivers of economic growth, or the connection of "global warming" to the economic crisis. In The Bubble Economy, Robert Ayres--an economist and physicist--connects economic instability to the economics of energy.

Ayres describes, among other things, the roots of our bubble economy (including the divergent influences of Senator Carter Glass--of the Glass-Steagall Law--and Ayn Rand); the role of energy in the economy, from the "oil shocks" of 1971 and 1981 through the Iraq wars; the early history of bubbles and busts; the end of Glass-Steagall; climate change; and the failures of austerity.

Finally, Ayres offers a new approach to trigger economic growth. The rising price of fossil fuels (notwithstanding "fracking") suggests that renewable energy will become increasingly profitable. Ayres argues that government should redirect private savings and global finance away from home ownership and toward "de-carbonization"--investment in renewables and efficiency. Large-scale investment in sustainability will achieve a trifecta: lowering greenhouse gas emissions, stimulating innovation-based economic growth and employment, and offering long-term investment opportunities that do not depend on risky gambling strategies with derivatives.

Robert U. Ayres, an American-born physicist and economist, is Emeritus Professor of Economics and Political Science at INSEAD, the international graduate business school. He is the author or coauthor of many books, including (with Benjamin Warr) The Economic Growth Engine: How Energy and Work Drive Prosperity.
or
Not Currently Available for Direct Purchase
Copyright © 2020 American Booksellers Association