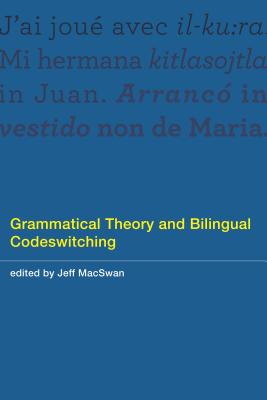 Theoretically significant work on the grammar of codeswitching by the leading researchers in the field.

Codeswitching is the alternate use of two or more languages among bilingual interlocutors. It is distinct from borrowing, which involves the phonological and morphological integration of a word from one language into another. Codeswitching involves the mixing of phonologically distinctive elements into a single utterance: Mi hermano bought some ice cream. This volume examines the grammatical properties of languages mixed in this way, focusing on cases of language mixing within a sentence. It considers the grammar of codeswitching from a variety of perspectives, offering a collection of theoretically significant work by the leading researchers in the field.

Jeff MacSwan is Professor of Applied Linguistics in the Program in Language, Literacy, and Social Inquiry and of Language and Speech in the Program in Neuroscience and Cognitive Science at the University of Maryland.
Loading...
or
Not Currently Available for Direct Purchase