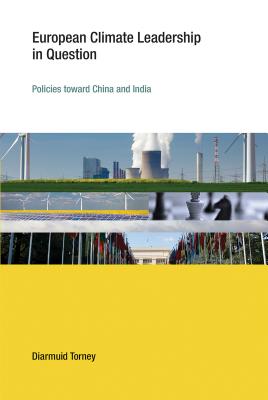 An analysis of the European Union's engagement with China and India on climate change policy that sheds light on Europe's claim to international climate leadership.

The European Union has long portrayed itself as an international leader on climate change. In this book, the first systematic assessment of Europe's claim to climate leadership, Diarmuid Torney analyzes the EU's engagement with China and India on climate policies from 1990 to the present.

Torney develops an analytical framework for assessing EU climate leadership that charts the factors driving the EU's engagement with China and India, the form of the engagement, and the Chinese and Indian response. He argues that EU engagement was driven by a desire to build its international role, growing concern regarding climate impacts, and an interest in the economic opportunities provided by the transition to a low-carbon global economy. European engagement with China and India took the form of institutionalized dialogue and capacity-building, with more extensive contact with China than with India. He finds little evidence of coherence between the EU's external climate change policies and other policy areas. Indeed, the overriding priority in both relationships was the deepening of trade.

Torney shows that China responded to the EU with limited normative emulation and lesson drawing; India's principal response was resistance. He argues that both European leadership on climate change and Chinese and Indian "followership" were severely constrained by a variety of factors, including the nature and extent of the EU's capabilities and the domestic politics, normative frames, and material interests of China and India, which did not align with the EU's agenda.

Diarmuid Torney is Lecturer in International Relations in the School of Law and Government at Dublin City University.
Loading...
or
Not Currently Available for Direct Purchase