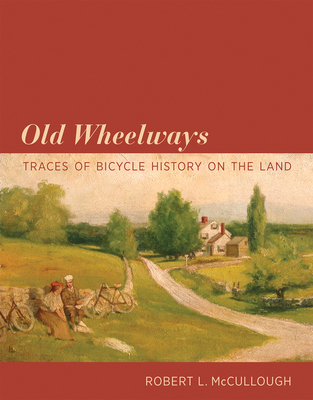 Traces of Bicycle History on the Land

How American bicyclists shaped the landscape and left traces of their journeys for us in writing, illustrations, and photographs.

In the later part of the nineteenth century, American bicyclists were explorers, cycling through both charted and uncharted territory. These wheelmen and wheelwomen became keen observers of suburban and rural landscapes, and left copious records of their journeys—in travel narratives, journalism, maps, photographs, illustrations. They were also instrumental in the construction of roads and paths (“wheelways”)—building them, funding them, and lobbying legislators for them. Their explorations shaped the landscape and the way we look at it, yet with few exceptions their writings have been largely overlooked by landscape scholars, and many of the paths cyclists cleared have disappeared. In Old Wheelways, Robert McCullough restores the pioneering cyclists of the nineteenth century to the history of American landscapes.

McCullough recounts marathon cycling trips around the Northeast undertaken by hardy cyclists, who then describe their journeys in such magazines as The Wheelman Illustrated and Bicycling World; the work of illustrators (including Childe Hassam, before his fame as a painter); efforts by cyclists to build better rural roads and bicycle paths; and conflicts with park planners, including the famous Olmsted Firm, who often opposed separate paths for bicycles.

Today's ubiquitous bicycle lanes owe their origins to nineteenth century versions, including New York City's “asphalt ribbons.” Long before there were “rails to trails,” there was a movement to adapt existing passageways—including aqueduct corridors, trolley rights-of-way, and canal towpaths—for bicycling. The campaigns for wheelways, McCullough points out, offer a prologue to nearly every obstacle faced by those advocating bicycle paths and lanes today.

McCullough's text is enriched by more than one hundred historic images of cyclists (often attired in skirts and bonnets, suits and ties), country lanes, and city streets.


Praise For Old Wheelways: Traces of Bicycle History on the Land…

…[A]nyone who's interested in the history of cycling, or the history of infrastructure and landscape, will find the images McCullough has collected fascinating.—Slate—

Based on extensive research, Old Wheelways is a confident and detailed recounting of the surprising ways the first bicycle boom transformed both the northeastern landscape and those who beheld it.... Old Wheelways can guide these future explorers, inspire newly penetrating visions, and change the way that we see a nation whose history we thought we already knew.

Robert L. McCullough is Associate Professor of Historic Preservation at the University of Vermont and the author of The Landscape of Community: A History of Communal Forests in New England and other books.
Loading...
or
Not Currently Available for Direct Purchase